Each light-emitting diode (LED) has an optimal current that it can safely handle. Going beyond that maximum current, even briefly, may damage the LED internally without any visible signs. The damage can include reduced intensity, inconsistent power requirements, heating, or shortened useful life. Thus, limiting the current through the LED with the use of a series resistor is a common and simple practice. When using high current LEDs (.5W, 1W, 3W, 5W), more efficient solutions are available, including switching constant-current regulators.

This calculator will assist you in determining the optimal value of the series dropping resistor to limit the current through your LED. Just input the indicated values and press the “Calculate” button. As a bonus, it will also calculate the power consumed by the LED.

The online calculator below allows for the automatic calculation of the necessary current limiting resistor to maximize the useful life of an LED. The calculator will display dropping resistor value along with power rating for either running a single LED or multiple LEDs in series from a power source.

If you require assistance in determining the color code for a resistor value specified, please be sure to visit our Resistor Color Code Calculation information page.

Note: When using LEDs in automotive applications, the battery voltage in a vehicle is not 12 volts; instead, they operate between 13.8 to 14.5 volts.

The LED current-limiting resistor is a common electronics component available from many sources. We stock a vast assortment of Resistors in 1/8 watt, 1/4 watt, and 1/2 watt models. 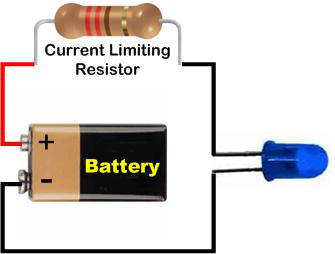 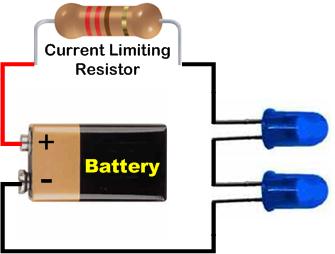 How To Identify LED Terminals

An LED has a positive (Anode) lead and a negative (Cathode) lead. The schematic symbol of the LED is similar to the diode except for two arrows pointing outwards. The Anode (+) is marked with a triangle, and the Cathode (-) is marked with a line.

The longer lead of an LED is generally the positive (Anode), while the shorter lead is the negative (cathode).