Specifications, Overview and Setting Up Your NodeMCU 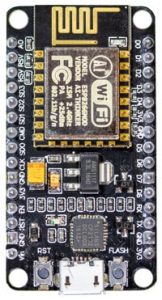 The NodeMCU (Node MicroController Unit) is an open-source software and hardware development environment built around an inexpensive System-on-a-Chip (SoC) called the ESP8266. The ESP8266, designed and manufactured by Espressif Systems, contains the crucial elements of a computer: CPU, RAM, networking (WiFi), and even a modern operating system and SDK. That makes it an excellent choice for Internet of Things (IoT) projects of all kinds.

However, as a chip, the ESP8266 is also hard to access and use. You must solder wires, with the appropriate analog voltage, to its pins for the simplest tasks such as powering it on or sending a keystroke to the “computer” on the chip. You also have to program it in low-level machine instructions that can be interpreted by the chip hardware. This level of integration is not a problem using the ESP8266 as an embedded controller chip in mass-produced electronics. It is a huge burden for hobbyists, hackers, or students who want to experiment with it in their own IoT projects.

But, what about Arduino? The Arduino project created an open-source hardware design and software SDK for their versatile IoT controller. Similar to NodeMCU, the Arduino hardware is a microcontroller board with a USB connector, LED lights, and standard data pins. It also defines standard interfaces to interact with sensors or other boards. But unlike NodeMCU, the Arduino board can have different types of CPU chips (typically an ARM or Intel x86 chip) with memory chips, and a variety of programming environments. There is an Arduino reference design for the ESP8266 chip as well. However, the flexibility of Arduino also means significant variations across different vendors. For example, most Arduino boards do not have WiFi capabilities, and some even have a serial data port instead of a USB port.

The NodeMCU is available in various package styles. Common to all the designs is the base ESP8266 core. Designs based on the architecture have maintained the standard 30-pin layout. Some designs use the more common narrow (0.9″) footprint, while others use a wide (1.1″) footprint – an important consideration to be aware of.

The most common models of the NodeMCU are the Amica (based on the standard narrow pin-spacing) and the LoLin which has the wider pin spacing and larger board. The open-source design of the base ESP8266 enables the market to design new variants of the NodeMCU continually.

Amica NodeMCU measures 49mm x 26mm with a standard pin space of 0.1″ between pins and 0.9″ between rows.

Official Amica NodeMCU
on Carrier Board

LoLin style NodeMCU measures 58mm x 32mm with a pin spacing of 0.1″ between pins and 1.1″ between rows

Depending on the Operating System you are using with the NodeMCU, the appropriate driver must be installed. Generally, Windows 10 immediately recognizes the CP2102 chipset while the CH340G may require separate installation.

We have experienced situations where both CP2102 and CH340G devices have not functioned or been recognized as expected. The solution was as simple as uninstalling the old driver and installing the most recent version.

The NodeMCU offers a variety of development environments, including compatibility with the Arduino IDE (Integrated Development Environment). The NodeMCU/ESP8266 community took the IDE selection a step further by creating an Arduino add-on. If you’re just getting started programming the ESP8266 or even an established developer, this is the highly recommended environment. Visit our dedicated page on setting up and configuring the Arduino IDE for a NodeMCU ESP8266.

NodeMCU Carrier Board with Serial Ports

The NodeMCU Carrier Board features a genuine Amica NodeMCU ESP8266 processor along with a DB09 male and female connector with an RS-232 level converter.

The NodeMCU Carrier Board schematic shows the two DB-09 connectors, along with the switch at SW1. The switch toggles the data from either DB-09 between Pin 2 or Pin 3 to the level converter.

Finally, there is a jumper position at J1. The allows serial data from either DB-09 to appear on the NodeMCU Rx pin.

It is important to note that with a jumper placed across J1, this will interfere with the ability of the USB connector on the NodeMCU module, in particular, the ability to program the NodeMCU. If programming/reprogramming the NodeMCU, it is advisable to remove the jumper when programming.

What Is The NodeMCU IoT Experimenter?

The NodeMCU IoT Experimenter is a versatile prototyping platform for use with a variety of the most popular NodeMCU modules including our NodeMCU Carrier Board. Great to use for IoT projects, advanced or straightforward interfacing, and as a prototyping platform. The NodeMCU, with its versatility, including its ability to be programmed and used from the Arduino IDE, makes it along with this prototyping board the perfect experimenter’s solution.

The NodeMCU IoT Experimenter measures 5 5/16″ x 4.5″ (135mm x 115mm) with a solder mask on each side, plated holes along with a high-contrast silk-screen labeling component and prototyping positions.

Features of the board include a mounting socket area to accept either wide 1.1″ or narrow 0.9″ pitch NodeMCU modules. This includes the Amica NodeMCU carrier board (narrow pin spacing) to compatible variants such as the LoLin NodeMCU models. Power can be provided directly to your NodeMCU module through its built-in USB interface. Alternately, power can be supplied to the IoT Experimenter board which has provisions for an integrated regulated power supply module.

The board offers over 1,000 plated-through holes on the prototype surface, mounting for eight status indicator LEDs along with dropping resistors and a power indicator LED. The prototyping area offers power busbars for the Ground (G), +3.3V (3V) power rail, and a third rail X. The third rail can be used for external voltages such as a 5V rail.

Interfacing to the NodeMCU is through a series of headers that extend each pin of the NodeMCU to rows of four headers. Each port is labeled to identify matching pins from the NodeMCU. The header area is located below the NodeMCU using standard 40-pin headers allowing for versatility in interfacing for sockets or header pins.

For more information about the NodeMCU IoT Experimenter, visit the support page.